Bárbara Bañuelos and Carles Albert Gasulla met a few years ago. Bárbara was working in theatre and struggling with the precarity of her job; Carles Albert is a graduate in German philology who speaks 5 languages. He also has a mental health diagnosis that forced him to leave his career as a professional translator and take a night job in a car park in Barcelona. He is passionate about poetry and literature – Louis Ferdinand Céline’s Journey at the End of the Night is an example – spending his nights reading and then recording his impressions of what he has read. Now, together on stage and surrounded by the audience, they construct an impressive two-hour performance, through a dialogue that flows smoothly like the pages of a book. It tells of their lives, the different forms of precariousness in our society, Carles Albert’s interest in Frantz Fanon or Donna Haraway, and his dialogues with the clients of the car park. Together they trace the story of an intellectual forced into darkness, but also what it means to tell this story, and how to do it. Hacer Noche means “to spend the night”, like a night spent reading in a car park. The time when society relegates people with mental health issues to invisibility; the night at the end of Céline’s journey, before the arrival of a new dawn.

When speaking about a stage work by Bárbara Bañuelos, it also helps to speak about her earlier works, as there is an invisible thread linking each piece with the next, a conductor wire weaving through all her work, and helping to comprehend the essential bonds of her artistic practice. Right now, the essential corpus traced through the personal poetics of Bañuelos (apart from previous collaborations with other creators, or her parallel music career) consists of the pieces Inventario (2015), Mi padre no era un famoso escritor ruso (2018) and Hacer noche (2021). Glimpsed on her intuitive horizon are the beginnings of what will be the fourth title in this continuum, La mujer del francotirador, already in outline at the moment. Taken all together they attest, for instance, to the expansiveness progressing from the ‘I’ to the ‘we’, the personal to the social, the private to the public.

Her projects always arise from question and intuition; beginning a process of personal immersion, investigation, gathering material, leading on to form an experience of travelling along the road to encounter the shape of the performance. This road is where the transition to an expanded “I” takes place, from the particular to the universal, and the journey, lasting two or three years each time, flows into the synthesis which is in itself the actual performance. This experience is always lived through the first person, setting off from the body of the artist herself as a living archive, from the physical, the emotional, the psychic and the intellectual. On the stage, this corporality has found its own language, self-defined as narrative neutrality, consistent and honest, with its own character, way of looking at the world and communicating it. This neutrality implies remaining non-judgmental, ensuring that the story becomes a rich kaleidoscope, flexible and polyhedral. “Finding this place,” asserts Bañuelos, “allows me to be on stage without fear, and to defend my own approaches”. In this corporeal and neutral being, the relationship between the spoken word and performativity develops in parallel. This development is accompanied by work with real objects and documents, a constant feature in Bárbara’s artistic growth, demonstrating her interest as a person and as an artist in building individual and collective memory, in how our imagination works and, in the dialectic, becoming more vigorous than ever these days, laying between reality and fiction.

Inventario was a ground-level exhibition of some of these objects and documents which Bárbara has been finding, copying and preserving obsessively since 1996. Arranged over the floor (from a distance they resemble the panels of Atlas Mnemosyne by Aby Warburg), the artist set out an oral record of the stories hidden among the papers. One of these documents was associated with a “family silence” (in her own words) and the creator needed to reconstruct, from there, the story of her paternal grandmother, which ended up becoming her next piece, Mi padre no era un famoso escritor ruso. In this she began to understand the lived situation of people linked to mental suffering, firstly from the intimate experience of a family member. But she wanted to know more, to expand her understanding of this reality. This was how she came into contact with the Asociación Radio Nikosia, a collective based in Barcelona, formed of people with and without medicalised pathways of suffering, which is defined as a political territory, a gathering which prioritises communal care and support. Its activities include a radio channel, with which Bárbara has worked on a number of occasions. There she got to know Carles Albert Gasulla, a member of the association, with a degree in German philology, an inveterate reader, speaking 5 languages, who has a precarious existence, with a job as night watchman in a car park. Listening to him, she felt this was a life and an experience worth sharing, and over time, this initial fascination led to the piece Hacer noche.

Within the artistic development of Bárbara Bañuelos, this piece offers a scenic key to mark a difference with respect to earlier works. While normally there was a frontal relationship with the audience, whom only Bárbara herself would face, on this occasion, Carles accompanied her on stage, establishing an intimate dialogue together in a warm setting, with the viewers arranged around them in a circle, contributing to the sense of closeness, in search of a greater sensitivity. The conversation is seasoned on the one hand with selections from Journey at the End of the Night, the novel by Louis-Ferdinand Céline which is a fundamental text for Carles. On the other hand, we also hear fragments from the diary Carles wrote during these long, austere nights in watchman’s box at the parking lot. This dramaturgical structure allows Bárbara to introduce topics such as insanity (stigmatised under the burden of a diagnosis, and which any one of us may experience, because no-one is safe from mental suffering, and because we live in a world which is in many ways itself raving mad), along with war or insecure employment. The colonialism which we impose, more or less violently, on other people, colonialism in Frantz Fanon’s definition, says that we exercise colonialism through the systematic denial of the other person. This may be through machismo, racism or even more subtly, through unconscious power relationships we create with people having a mental illness diagnosis, whose basic humanity we sometimes deny, by for example, depriving them of their personal agency in the management of their desires.

Finally, Hacer noche is the staged embodiment of what the writer and thinker Remedios Zafra calls a transformation of individual vulnerability into community strength, removing an intimate experience from the private and / or therapeutic space, in order to stop associating sickness with blame or shame, ensuring that no bodies and personalities remain hidden, and ultimately disappear. “It is vital”, ends Bárbara Bañuelos, “that communities, minorities, cultures or people who suffer stigma, whatever it is, should survive over time. We have to cooperate so that these auto-narratives are given publicly, because when someone can tell their own story in the present tense, this plants the seeds for the future of the person, of the community or society. This is what Hacer noche is for me, an exercise in listening, a narrative link, an intimate multitude”. 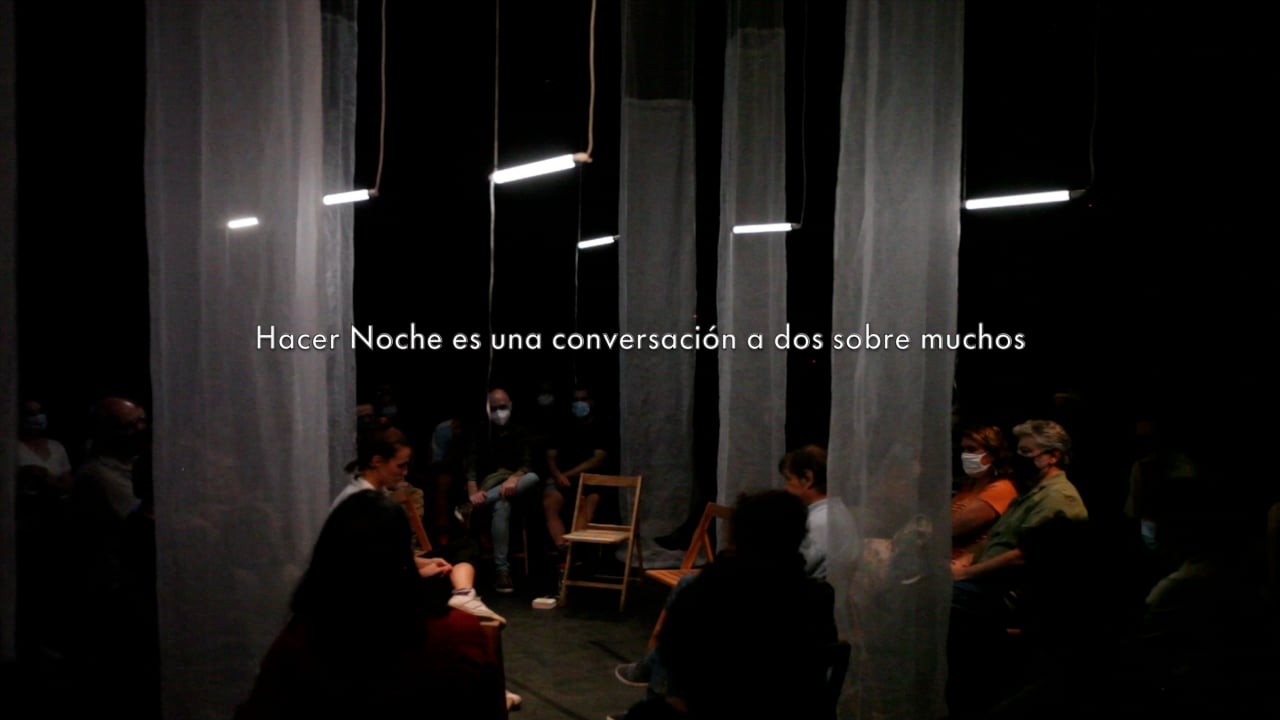